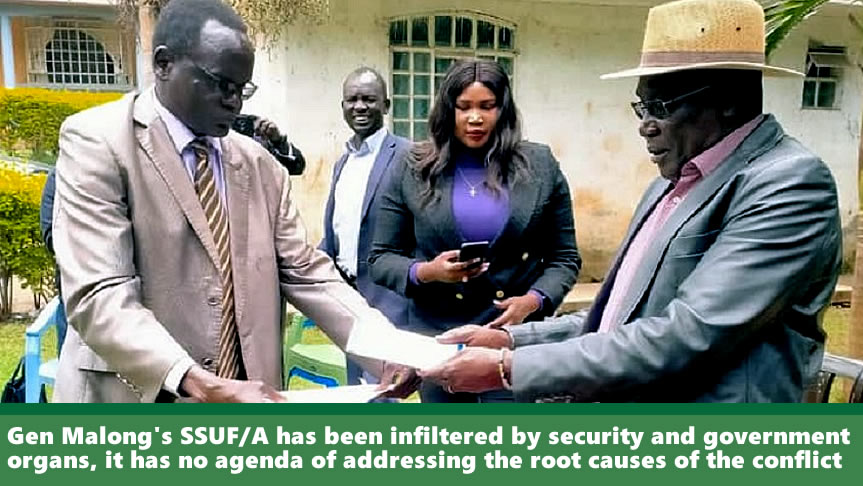 The Leadership Council of the South Sudan Opposition Movements Alliance (SSOMA-LC) has unanimously resolved to dismiss Paul Malong’s South Sudan United Front/Army (SSUF/A) after findings of an investigation exposed that senior leader of the SSUF/A has been infiltered “by government and security organs in Juba”, and that “has no common agenda with the other SSOMA member organizations in the Alliance of addressing the root causes of the conflict in South Sudan”.

The decision was reached during an extraordinary meeting of the SSOMA-LC that was held on March 11, 2021.

Malong’s SSUF/A was previously suspended on September 25, 2020, for a breach of SSOMA’s Terms of Reference after reports surfaced that indicating that Malong was insincere in the SSOMA/Sant’Egidio process and had been secretly reaching out and communicating with the Kiir regime in Juba seeking a separate peace forum.

Gen Malong’s SSUF/A has been infiltered by security and government organs, it has no agenda of addressing the root causes of the conflict

According to a SSOMA press statement announcing the dismissal, another finding of the investigation concluded that “The SSUF/A was plotting to take the leadership of SSOMA and use it to enhance its negotiating position with the government to finalize its disgraceful return to the bosom of Kiir’s regime.”

Since its suspension, the SSUF/A, in cohorts with Pa’gan Amum’s Real SPLM (R-SPLM) have openly come out to confirm their secret dealings with the Kiir regime. They have since met and signed a few documents paving their return “to the bosom of Kiir’s regime”, leaving the root cause of the conflict untouched.

At its core and with only the National Salvation Front (NAS), The National Democratic Movement-Patriotic Front (NDM-PF), The South Sudan National Movement for Change/Army (SSNMC/A), and The United Democratic Revolution Movement/Army (UDRM/A), SSOMA remains the vanguard of the people of South Sudan that shoulders the responsibility of “struggling for the establishment of a democratic federal republic in South Sudan based on new political, social and economic dispensation”.